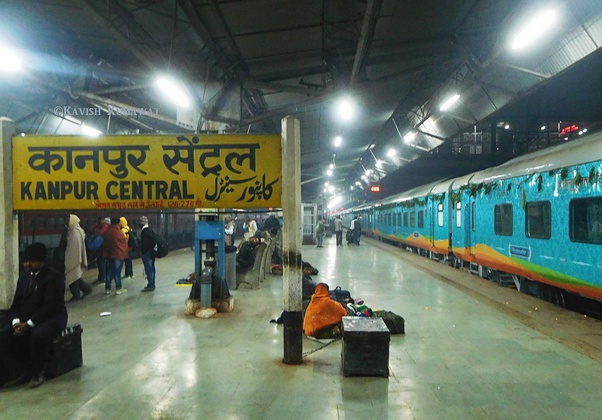 Nobody likes their train being delayed but as an Indian, we all have to face it. Most of the people travel for fun, while others travel for work or to meet an emergency need. Train delay can ruin everyone’s enjoyment of a good journey. That is why we have come up with this blog in which we will help you stay away from delays during train travel. Today we are going to look at the trains that run between Kanpur Central Station and get delayed most of the time.

Kanpur Central Railway Station, one of India’s four central railway stations, which has the world record for the largest interconnecting route system. Kanpur is one of the most active stations on the North Central Railways, with about 150,000 people passing through each day. Kanpur is also strategically located on the crucial Howrah-Delhi wide gauge railway line. More than 275 trains stops at this station and as a result, commuters and tourists have a variety of options.

Bhagalpur train is mostly 12 hours late and if you are travelling in this train then you will have to  wait for eternity within the train. It’s still a mystery why such trains are called “Express.” When we take look at the root of this problem we found out that the cause of the delay is a delayed departure from Bhagalpur Station. The complexity of its journey prevents it from making up time once it departs the source station with a delay of more than an hour. If you’re travelling from Bhagalpur to Kanpur Central, you can get tickets on the Malda Town – Old Delhi Farakka Express (13413), which has fewer delays.

Rank 2: Islampur – New Delhi Magadh Super Fast Express (12401) ranks second on this list because the average time delay is 6 and a half hours. The main issue with this train is that it consistently starts its journey approximately an hour late, and the time adds up as it travels along the route. We would suggest you to avoid this train becuase travelling with this train would be fun for none. But in case you don’t have any other choice you can minimize the travel time by boarding a train from Patna Junction.

This train is ranked third on our list and the reason behind it is the train being delayed nearly 6 hours. We tried to find main cause of its problem and we found out that 12874 often left Anand Vihar with more than an hour’s delay. In fact, in the last 50 days, it has only departed Anand Vihar on time seven times only. When there is a delay at the start, it continues to increase the delay time. So, in case you have to travel go from Anand Vihar to Kanpur Central, the 12004 – New Delhi – Lucknow Swarna Shatabdi is the best option (which is hardly late on most days).

An express train from Anand Vihar in Delhi to Kolkata Chitpur is next on our list. We do not recommend that you take train 13132, which has an average delay time of more than 5 hours and 45 minutes. The train’s delayed departure from the source station is the primary cause of its poor performance (Anand Vihar). Normally, the train departs Anand Vihar one hour or more late, and then continues to be delayed throughout its route. You can skip this train and take the Delhi Anand Vihar – Guwahati North East Express (12506) instead, which is less likely to be delayed.

Despite the fact that the train departs Guwahati on time, it is delayed between Patna Junction and Mughal Sarai Junction. That’s what its runtime statistics imply, at least. You can book tickets in Dibrugarh Town – New Delhi Rajdhani Express instead of 12501. (12423). The average delay time for this train is 15 minutes.